In the last blog post I described how you could test whether the difference between two groups was statistically significant using an independent-samples t-test. (I will rely heavily on that blog post in this one, so I encourage you to at least skim it before reading this.) I used the example that your company (a retail website selling children’s toys) had launched two advertising campaigns and wanted to see whether they brought in different amounts of revenue. I cheekily assumed that the population distribution of amount spent per site visit was approximately normally distributed. However, this is unlikely to be the case - you are much more likely to have a large number of visitors that buy nothing, a smaller number spending a small to moderate amount, and then a minority of visitors spending a lot.

What if my distributions are not normal? 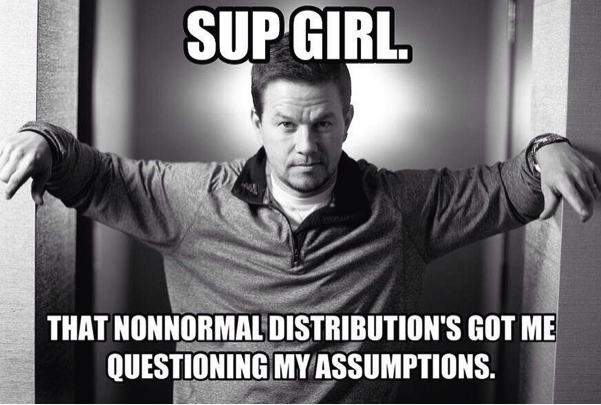 As with the last post, let’s say we collected a sample of 40 site visits for each campaign. To simulate the samples, I will resort to my much-loved method of creating Franken-distributions - in this case, I am merging elements of exponential and uniform distributions, plus throwing in some zero counts. This will give us some inflation around zero and a tapering off as the amount spent per visit increases, which is a far more realistic representation of the sort of data we’d collect.

As you can see in the histograms below, the distribution of observations for campaign 1 appears to differ from that for campaign 2, so the group labels are not likely to be arbitrary. The frequency of observations where nothing or very little was spent in a visit is lower in campaign 1, and the maximum amount spent in any visit was higher.

The next step is creating the test statistic to assess whether the difference between the campaigns’ revenue is meaningfully different. This is simpler than in the last post - we can use the raw mean difference rather than standardising it.

The test statistic is 64.92, which indicates that visitors spent \$64.92 more per visit if they came to the site via campaign 1.

We’ll now move on to the permutations. To illustrate how this works, I’ll start with a single example.

Rejecting or accepting the null hypothesis

To check whether your test statistic is statistically different from 0, we just check how it ranks compared to the permuted means:

The number of permuted mean differences that exceeded the true mean difference was 0. As there were 1,000 permutations, the significance level is simply 1/1001, or p = 0.001. As this is less than 0.05, this means that campaign 1 generates significantly more income than campaign 2 per site visit.

This is a brief introduction to permutation tests, which is a family that includes well-known non-parametric methods such as the Fisher’s exact and Wilcoxon rank-sum tests. These tests are a useful part of your statistical arsenal when your data don’t fit the assumptions of parametric tests (as is often the case). However, these of course aren’t a magical fix-all to your problems and must be used sensibly! As an example, a problem we might have could be that taking the mean of such skewed data is not particularly meaningful, therefore doing a test of mean differences does not make sense.

As part of writing this post, I heavily borrowed from the code used in Thomas Lumley and Ken Rices’ presentation for the Summer Institute in Statistical Genetics, and used code and explanations from Charlie Geyer’s tutorial from his class at University of Minnesota, Twin Cities.