When I first seriously decided to learn programming about three years ago, I picked up Python using Zed Shaw’s Learn Python the Hard Way. While an excellent introduction to programming for someone who had previously only cobbled together SPSS syntax, his explanation of object-orientated programming (OOP) went completely over my head. I confess, I had spent the entire time since convinced I was incapable of understanding OOP!

When refreshing Python recently, I used the book Practical Programming: An Introduction to Computer Science Using Python. This book had such a nice explanation of OOP that it (well, the basics at least!) finally clicked for me. I’ll therefore use this week’s blog post to assist someone else to conquer OOP using Python.

You will remember that Python uses a number of types. A type takes the form of a value or collection of values, and each have specific methods you can call on them.

For example, a major type is a list. Let’s say we own a cattery and we want to keep track of the cats we have at the moment. We can store their names in a list: 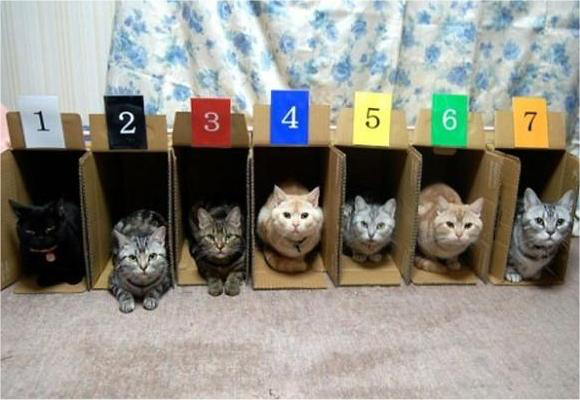 However, today Whiskers is going home and we are also getting a new cat (Mr. Paws). We can update our list by calling the methods ‘append’ and ‘remove’:

Creating a class is creating a new type

You can see that the list type has a general form (immutable sequence of any length, containing any type of value, separated by commas and surrounded by square brackets). You can also see that we created a specific list object which contained a sequence of strings to represent our cat names.

We can extend the functionality of Python by creating our own types. The general forms of each of these types are called classes, and we can create a specific object which is an instance of this class. We can also define the methods we want our class to have.

Let’s say that we want to make a general form to describe the cats we are looking after. We will do this by defining a new type we’ll call Cat. This Cat will have a name, a temperament, and a weight (in kgs). In this first step, you can see that we are are using the keyword class to indicate to Python that we want to create a type, and the object argument indicates that this is an object. For now, this class is empty as shown by the pass argument.

If we want to create a new Cat, we simply assign it to a new variable like below:

The first thing we want our Cat type to do is print the name of the cat. A (bad) way to do this is to attach a name value to the Cat object like below. This Cat now has an instance variable called name.

We could then use this name variable in a function:

We can make this function a method of the Cat type by moving it into the class. Note that an important change to the code is that the cat parameter has been replaced with self. This indicates that the class refers to the specific instance to supply it with the parameter for the function, which in this case is felix.

Obviously defining the instance variables outside the class is undesirable - it is inefficient and prone to mistakes. Instead, it would be better if we could just include the variables at the same time as creating a new Cat. The way we do this is to add a constructor method, which in Python is called using __init__. This is one of Python’s special methods that can be used within classes. You can see how we’ve included this below:

You can see that, just like a function, the __init__ method allows you to pass the name parameter to a new Cat when it is being created. You can also see that the class is again passing a reference to the instance being created using the self parameter. As such, the __init__ method also requires that you attach each instance variable to the instance. You can see we did this by defining the name parameter as self.name within the class.

You may also have noticed that I changed my name_print method into a method called __str__. This is another special method. The __str__ method returns a string representation of the object when it is printed. As the only instance variable we have input so far is the cat’s name, that is all that string returns. __init__ and __str__ are just two of the many special methods Python has.

The final step is adding in the temperament and weight instance variables and methods to use them. We do this by simply adding them to the list of parameters within the __init__ method, and then writing functions that define what the new methods do. In this case, a method I have included to use temperament is is_friendly, which returns True when the cat is friendly and False otherwise. Additionally I have included an if_weighs_more method for weight, which takes a second “threshold” weight as an argument and returns True if the cat weighs more and False otherwise. Finally, you may have noticed that I changed the __str__ method. As it is supposed to be a full representation of the object, I have expanded it to include all of the instance variables.

Ok, so imagine that we have cats with special needs in our cattery. One such type of cat is older cats. Let’s pretend that older cats have some property that younger cats don’t have, which is that they get illnesses that require specific care plans. We could write an entire new Older_Cat class from scratch. However, this will create redundancy as we will be repeating all of the instance variables and methods as in the Cat class.

We can get around this using something called inheritance. Inheritance is where a class (called the child) can inherit the properties of another class (called the parent). In our case, the Cat class is the parent, and the Older_Cat class is, ironically, the child. Below is how we would begin an inherited class. You can see that instead of passing the argument object, we pass the object Cat to this class.

We add in the __init__ method to this child class. You can see it works a little differently than in the parent. Instead of adding each of the Cat instance variables one-by-one to the Older_Cat class, we instead call the __init__ method from Cat within the class.

Ok, so the reason we have created this child class is to add in additional instance variables and methods. Below you can see that I have added the additional instance variable illness into the __init__ method in the exact same way we added them to the parent class orginally. You can also see I have created a new method specific to Older_Cat that uses illness, called has_illness. This method returns a description of whether the Older_Cat has an illness, and if so, what it is and to consult the care plan.

I hope this has been a helpful overview of OOP and has helped you understand this really useful concept in programming. As I said at the beginning of this article, I relied heavily on the wonderful Practical Programming: An Introduction to Computer Science Using Python, which gives a much more comprehensive coverage of this topic.