When I first learned least-squares linear regression in my undergrad degree, I remember that we approached it in the “calculus” way: taking the sum of the squared differences for each observation and solving a massive (and tedious) equation until we arrived at our coefficients and line of best fit. I actually had no idea there was an alternative way of calculating OLS regression until I completed Andrew Ng’s brilliant Machine Learning course on Coursera, and while taking my linear algebra unit I fully understood how it works. I’ll go through the logic and calculations in this blog post, and hopefully you will see how much more elegant it is than the more traditional approach. This blog post will assume some basic understanding of matrix operations: if you’d like to get an overview of these, feel free to look at my earlier blog posts here, here and here. It will also assume familiarity with OLS regression.

Say we are trying to predict students’ test scores (out of 10), and the one measurement we have is the average number of hours of study they did a day for this test. Let’s also say (in order to keep the calculations under control) that we only have 3 observations. Our dataset therefore looks like this:

We believe there is some underlying relationship between these variables, which can be modelled in the form of a line \(y = b_0 + b_1x_1\), where \(b_0\) and \(b_1\) are the intercept and the \(x_1\) coefficient respectively. However, when we plot our points, we can see that no straight line would go through all 3 of our points. Instead, looking ahead a bit, we can see that linear regression instead attempts to fit a line that is as close as possible to each of the points we have observed. 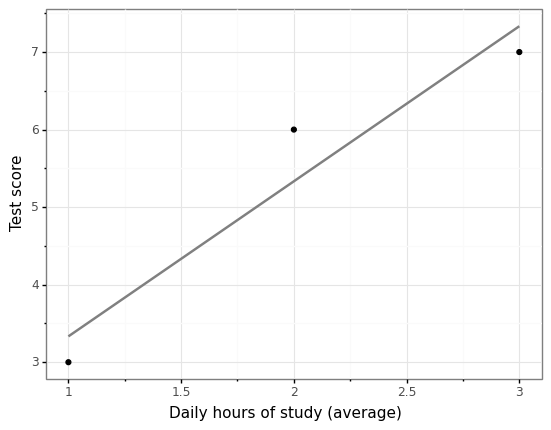 We can see for the first 2 observations we have a perfect fit, where the coefficients \(b_0 = 0\) and \(b_1 = 3\) would solve our equations. However, the third observation throws this solution out the window. In fact, there is no pair of \(b_0\) and \(b_1\) that will solve this equation. So what do we do? Obviously linear regression comes up with solutions to this issue all the time, so it must be solvable! I will demonstrate how using the normal equation approach.

In order to get started, let’s move away from the world of equations and instead start representing our data as matrices and vectors. We have three components we want to represent: the values of our features (\(X\)), the values of our outcome (\(y\)), and the unknown \(b_0\) and \(b_1\) that we’d like to solve for (\(b\)).

We’ve added a column of 1’s to the \(X\) matrix (also called the design matrix) in order to represent our intercept. This is because the value of \(x_0\) in any linear equation is always set to 1, in order to hold the intercept at a constant. Now let’s have a look at what these matrices and vectors represent in linear algebra.

where \(p\) and \(q\) represent any real numbers. The reason that we cannot solve our three equations with the \(y\) that we have from our data is that it does not lie on this plane: in other words, it is not a linear combination of our two column vectors in \(X\). We can see this in the diagram below. 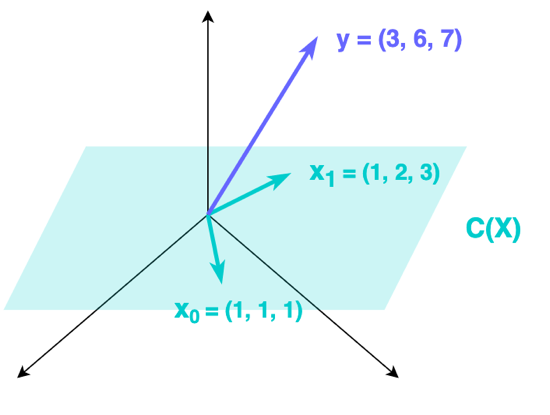 It turns out that the shortest path from our vector \(y\) to the plane \(C(X)\) is a straight line which sits at a 90° angle to the plane and connects the plane to the vector. The point where this line meets the plane is \(\hat y\), the nearest approximation in the plane we have to our observed \(y\), and the line itself is our error, \(e\), which represents how far away our approximation \(\hat y\) is from our actual \(y\) vector. 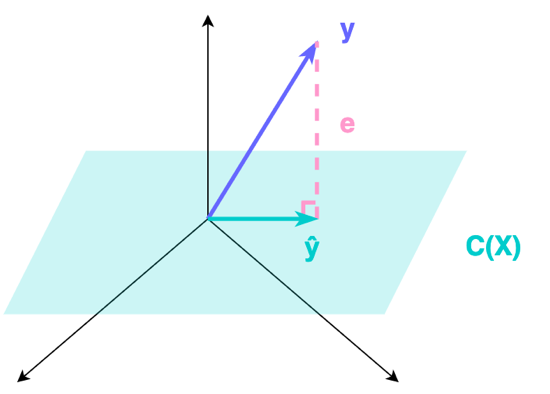 Pairs of orthogonal vectors have a very nice property: when we take their dot product, we get 0. This means that \(e\) multiplied by any vector in \(C(X)\) will be 0. Generalising this to the whole matrix X, we get:

When we expand this equation and move one of the components to the righthand side, we end up with the equation that will allow us to find our \(b\)‘s:

Let’s see this in action with our example dataset. For the lefthand side, we want to calculate our new matrix \(X^TX\).

For the righthand side, we want to calculate our new vector \(X^Ty\).

We can now put these together to create our new system of simultaneous equations, and solve these for \(b_0\) and \(b_1\).

This yields the two solvable equations:

Each of the components of \(e\) represents the vertical distance between our line of best fit and our observed \(y\), as shown in the graph at the beginning of this post. For example, \(y_1\) “misses” the line by \(-\frac{1}{3}\) of a test score grade.

Finally, let’s compare the result we got from our normal equation approach to the result given by sklearn‘s implementation of linear regression. Let’s start by fitting our model, with the \(X\) and \(y\) matrices we defined above:

Finally, we’ll use this model to predict the best fitting values from \(X\), that is, to generate \(\hat y\):

We can see that our use of the normal method has achieve the exact same values given by the standard Python implementation of linear regression!