You’re probably familiar with what a function is: it’s a formula or rule that describes a relationship between one number and another. For example, the function \(f(x) = |x| + 1\) describes the relationship between a number and its absolute value plus 1. If you think back to our previous blog post, you can see that what we’re actually describing is a relation, where \(x\mathrel{R}f(x)\) is given by \(f(x) = |x| + 1\). 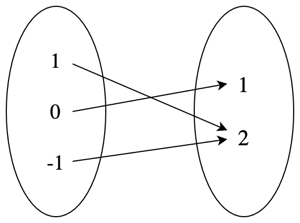 The above example illustrates a few important things about functions that distinguish them from relations. Firstly, as you probably already realised, a function is designed to map the elements from one set \(A\) onto another \(B\), which is denoted as \(f: A \rightarrow B\). In the case of our example above, we were just mapping from a set of three numbers \(\{-1, 0, 1\}\) to another set of three numbers \(\{2, 1, 2\}\).

However, functions can be (and usually are) used to describe the relationship between infinite sets such as the natural or real numbers. In fact, we can keep going with our example function to think about such a mapping. As our input set includes both -1 and 0, let’s imagine that our input set is the integers \(\mathbb{Z}\). What would then be the set be that we’re mapping to? As any \(f(x)\) can never be smaller than 1, then the output set would be all of the natural numbers \(\mathbb{N}\). As such, our function \(f(x) = |x| + 1\) would be defined as \(f: \mathbb{Z} \rightarrow \mathbb{N}\).

The final thing to note about functions concerns how the input elements relate to the output elements. Unlike in relations, every input value \(x\) can only map to one value in the output value \(f(x)\). This means that, for example, a relation that included \((1, 2)\) and \((1, 3)\) would be a valid relation, but would not be a function. 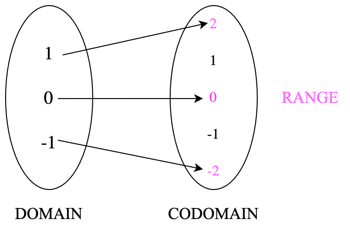 It is also possible for functions to be neither injective nor surjective, or both injective and surjective. This can be seen in the diagram below. In the latter case, this function is called bijective, which means that this function is invertible (that is, we can create a function that reverses the mapping from the domain to the codomain). 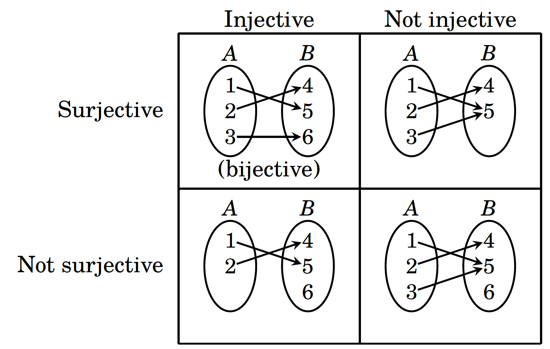 Let’s now have a look at how we prove whether a function is injective or surjective.

In order to look at how to prove injection and surjection, let’s walk through an example problem.

We know that if a function is bijective, then it must be both injective and surjective. What we need to do is prove these separately, and having done that, we can then conclude that the function must be bijective.

We’ll start with proving that the function is injective. In order to do this, what we need to do is prove that, for any two elements \(a, a'\) in the domain \(A\), if \(a \neq a'\), then \(f(a) \neq f(a')\). In other words, we need to prove that any two distinct elements in the domain do not map to the same value in the codomain.

The easiest way to do this is usually with contrapositive proof. We start with the assumption that \(a, a' \in A\) and \(f(a) = f(a')\), and we want to show that this implies that \(a = a'\), indicating that the only way in which two elements in the codomain could be equal is if they are mapped to the same element in the domain. Let’s apply this to our problem.

We’ve thus shown that if we pick any two arbitrary \(a, a'\) in the domain, the only way their associated \(f(a), f(a')\) in the codomain can be equal is if \(a, a'\) are equal. Therefore our function is injective.

As you can see, although it seems intimidating at first, the principles underlying functions and their proofs are pretty straightforward. Credit for most of the material in this post (including the third and fourth images) goes to Richard Hammack’s wonderful Book of Proof.