This year, I attended Big Data LDN for the first time as part of the JetBrains booth team, where we were representing the Datalore, DataSpell and DataGrip teams. Seeing as entry is free, it attracts a huge number of attendees. This year was the biggest yet, with more than 13,000 people coming through the doors, so it made for a very busy and interesting couple of days!

Given that I was heading to London from Cardiff after attending PyCon UK, taking the train seemed like the most sensible option. However, what started as a relaxing trip soon turned into a debacle as we were informed that we’d need to change at Reading due to some electrical issues from the previous day. After running around Reading station trying to find a train to London, I was eventually directed to hop back on the same train I’d been asked to get off. It wasn’t the end of the world, as I made it into London only an hour behind schedule.

I'm not sure if European long distance trains are unreliable or I just have terrible luck. Currently been dumped out at Reading on the way to Paddington due to electrical issues and trying to track down a train to actually get me to London.

Our hotel was over in Hammersmith, about a 20 minute walk from the conference venue at Olympia London. After checking in, I headed over to help my colleagues set up our booth. However, we discovered that we’d suffered a postal accident and none of our swag had arrived! After some panicked calls, we located some kind colleagues in the UK and Europe who could send us some emergency swag arriving the next day. We had a few stickers I’d packed for a user group to tide us over in the morning. Phew! With that solved, we arranged our booth, stocked it with snacks and water, and did the final tech checks for our demos.

After we finished setting up, I headed out for dinner to Champor Champor. One thing I really miss from Australia is Malay and Singaporean food, so whenever I’m in the UK, I always take advantage of the opportunity to have some. The last time I went to this restaurant was just before the pandemic, and it was just as good as I remember!

After a stop at Pret a Manger for breakfast, we arrived at the venue bright and early to set up and get ready for the first attendees to arrive at 9:00 am. 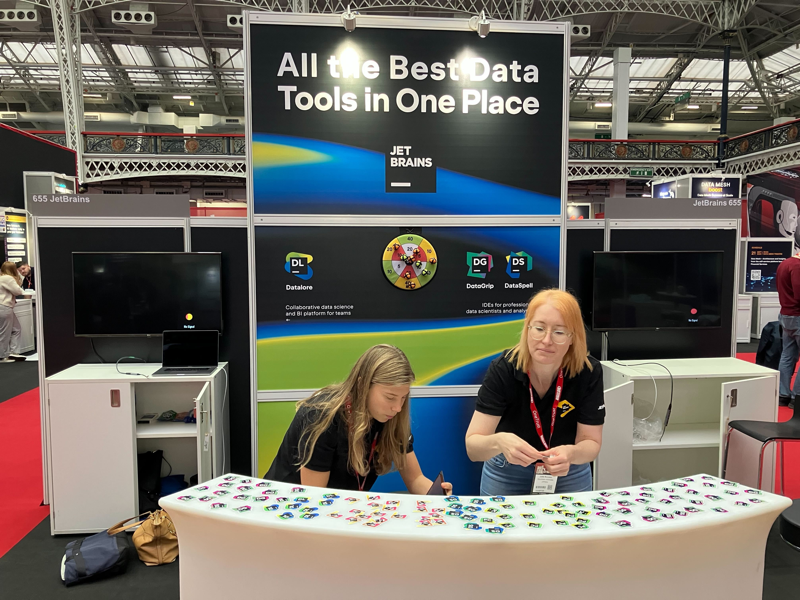 Luckily, we had our own exhibitor’s entrance, as the lines to get in were massive!

Things really kicked off at around 9:30 am, and after that we were busy – I felt like I didn’t stop talking until 3:00 pm! There was a very interesting mix of attendees, from people working as data scientists, engineers, and analysts, to those in marketing or sales who worked with data in some capacity. This meant we got a wide range of questions at the booth. A lot of attendees, especially those in technical team lead positions, were curious about our new data tools, and we had a lot of fun showing off what they can do with demos throughout the day. We also had a number of students who were interested in getting into data science, and I really enjoyed chatting with them and helping out where I could. 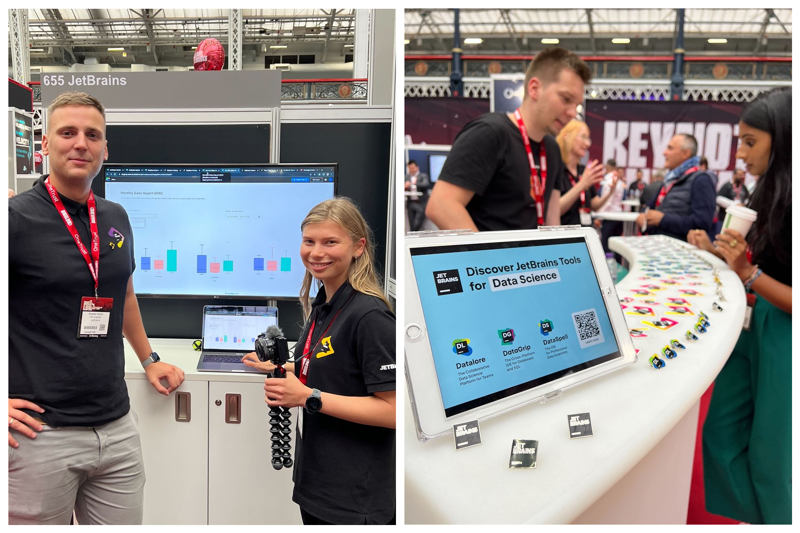 Just as our stickers were running low, we got an emergency delivery from the lovely Helen Scott, with the remainder of the swag arriving just after lunch.

Final day of #BigDataLDN and now we have these beautiful pins 😍 Come by booth 655 and visit us! pic.twitter.com/n8EJDbFWKw

Afterwards, we headed out for a well deserved dinner at the restaurant Samaia for Georgian food, where I stuffed myself with khachapuri and khinkali. By this stage, I was completely knackered, but the rest of the team gamely headed out for some sightseeing, including wandering around Piccadilly Circus.

Our second day was a little quieter, but no less interesting. We had a similar mix of people as on the first day, but as there were fewer attendees, we had a bit more space to answer questions and go into depth about our tools. We also used the darts game we’d set up at our booth to give away Datalore licenses and some swag. Although we set a target score of 50, I found myself constantly bending the rules for those who didn’t meet the threshold and giving the prizes away anyway! 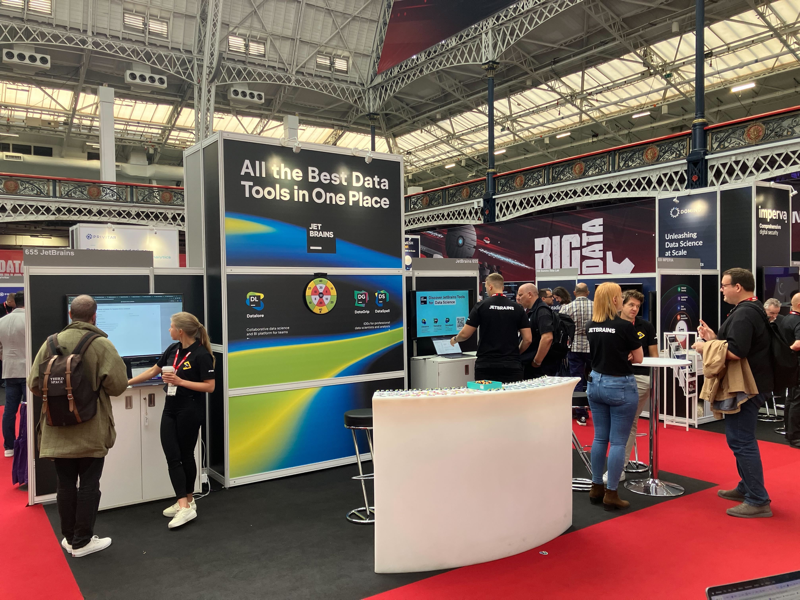 In the afternoon, I gave a talk on how to avoid trying to build your data team around people who can do everything, and explained how companies above a certain size or level of complexity are better off hiring separate specialists in data engineering, data science, and/or BI analysis. I wrote this talk in conjunction with my colleague Pasha Finkelshteyn, but unfortunately, he was unable to attend the conference this year.

The setup of the theaters was really interesting: there were 12 theaters set around the edge of the conference hall, so they transmitted our voices through headphones rather than using a microphone. Initially, it was strange speaking without having my voice amplified, but once I adjusted it was quite nice – almost like chatting with a group of friends rather than giving a presentation! The talk was well received and I got some great questions and feedback, both at the conference and from people contacting me afterwards. 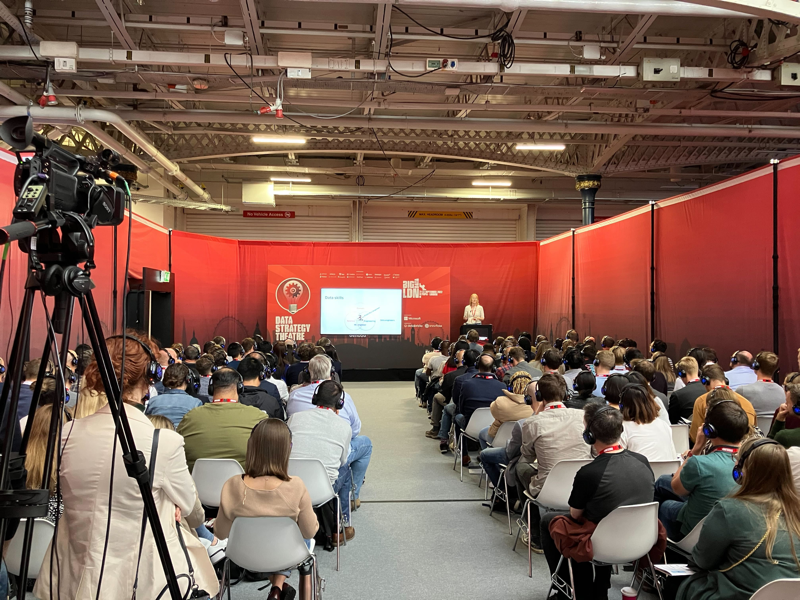 The conference started winding down at around 5:00 pm, and by 6:00 pm we were packing up. 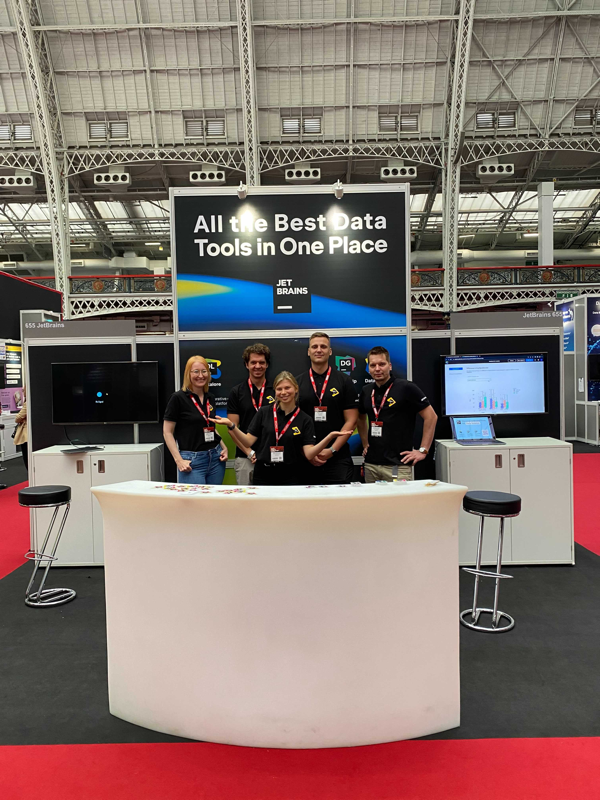 I took advantage of my last night in the UK by grabbing a pub dinner (another thing I miss from Australia) at The Dartmouth Castle with the team, and then headed back to the hotel for an early night, as I had a morning flight to Portugal the next day.

Big Data LDN was definitely the biggest conference I’ve ever been to, and I really enjoyed myself. The mix of attendees was interesting, and it was great to be in an environment where everyone was interested in one of my biggest passions – data! It was also a lot of fun being able to show off the work we’ve been doing with our new data science and data analysis tooling at JetBrains, and we got some amazing feedback from the attendees. Hopefully next year I will get a chance to slip away from the booth to catch more of the other talks live, rather than just on YouTube afterwards!