I’ve been hearing positive things about NDC Oslo for quite some time. I enviously listened to my developer friends’ stories about the incredible talks, parties, swag, and of course, the endless food. So, you can imagine how happy I was to have a talk accepted this year and finally get the chance to experience this conference for myself!

NDC Oslo was a full 5-day, in-person event this year, after having to move the last day online last year due to COVID. The event was sold out, with more than 2,500 people attending. The workshops ran for the first 2 days, and then the talks ran for the last 3, with 7 concurrent streams. I attended for the last 3 days, both as a speaker and at the JetBrains booth.

I needed to get to Oslo after PyCon Portugal, which made for a slightly awkward trip between Oslo and Porto. As I had a tight layover, this was the flight I was most worried about on my trip. However, to my very pleasant surprise, Porto and Barcelona airports ran smoothly, meaning I comfortably made my connection. I was especially impressed that my check-in luggage made it – I was so convinced that it wouldn’t that I packed some spare clothes in my carry-on!

On the advice of NDC Oslo veterans, I took the excellent Flytoget Airport Express to get to the city center. I was glad the train was warm, as the weather was a bit of a change after sunny Portugal! After checking in, I got my first taste of Norwegian sticker shock when I realized I’d paid around €25 for a basic burger and fries.

Having a slight heart attack after realising I paid €25 for a burger. pic.twitter.com/FSHTqnTq9P

After a long day traveling, I went back to the hotel and ended up catching the Nordic championships of Timbersports, which is now my new favorite specialty sport.

The next day I caught up with Geir Arne Hjelle from Real Python, and then headed over to the speaker hotel to check in. NDC thoughtfully added a conference registration desk at the hotel reception, so I took advantage and grabbed my badge. In the afternoon, I met my team at Oslo Spektrum, where we set out our swag and made plans for the next three days. I finished off the day by going to GeekBeer, which was a lot of fun and gave me a chance to meet some of the other attendees.

Wednesday was an early start, as we needed to be at the booth by 8:00 am. By around 8:30 am, the booth was already getting busy, with plenty of people wanting to stop by to say “hi!”, grab some swag, or ask about some of our new products like Space or Fleet. A lot of the attendees were already JetBrains customers and just wanted to chat about the products they were using, especially about ReSharper and Rider.

Come say hi at the booth at #ndcoslo - we have so many beautiful pins and stickers! pic.twitter.com/CLSb3ebBmB

The conference was set up with a stage in the middle for the keynotes, all of the vendor booths and seating areas positioned around this, and then the food stands running around the perimeter. I have to admit I was quite dazzled by the food. The organizers invited a bunch of vendors to come in with a range of savory and sweet options, and you could grab whatever you liked throughout the three days. There was a very dangerous ice cream and smoothie stand right near our booth, which I definitely visited a few too many times! 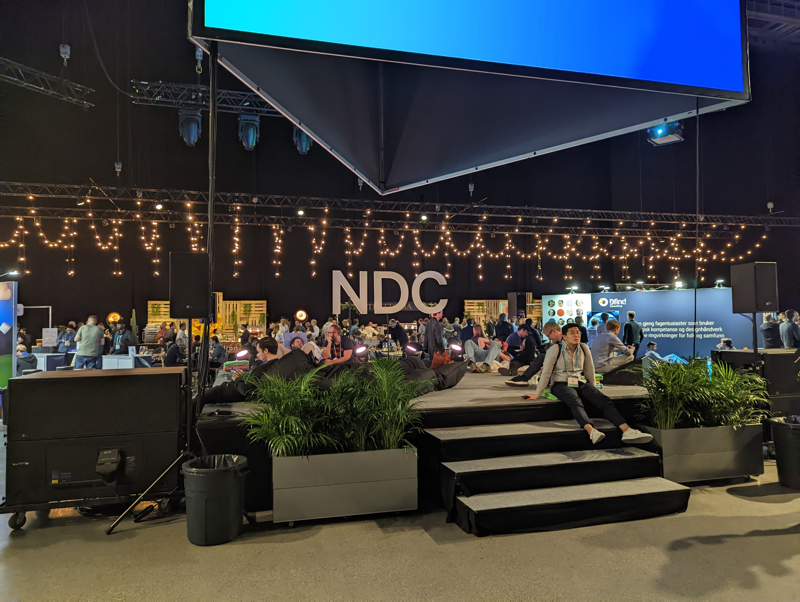 The vendors were a mix of Norwegian and international companies, including some big names like AWS. There were also a lot of Australians, including the lovely guys from Seq (with a bonus cameo in the below image from Guy Royse). 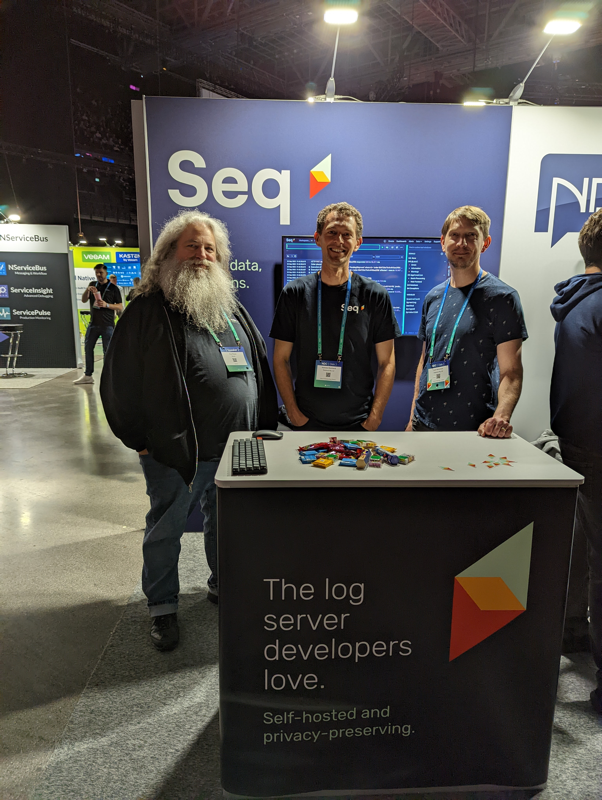 I had been invited to speak that evening at the first meeting of the MLOps Community in Oslo, hosted by Alv. I gave a talk on how machine learning models understand text by demonstrating a couple of ways you can build a clickbait classifier, which I had also presented the previous weekend at PyCon Portugal. Jawad Saleemi also gave a talk on how they are using machine learning to optimize customer satisfaction at Ruter, Oslo’s public transport provider. It was a fantastic evening and I met a lot of very interesting people and got some great feedback on my talk. Arturo Opsetmoen Amador did an excellent job of organizing the event, even getting professional photos and a video made, and giving us beautiful speaker gifts with a bottle of wine, a thermos, and a very nice umbrella. 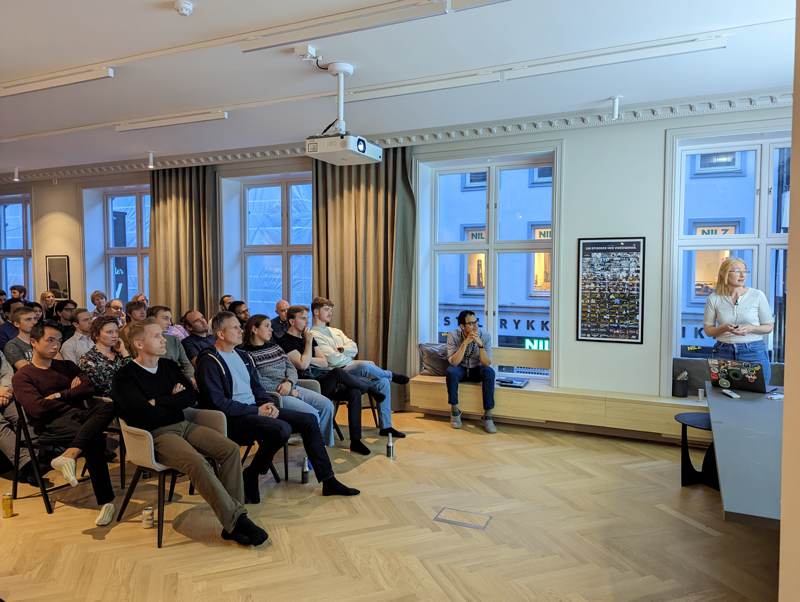 Thursday was another early start. We again had a lot of visitors to the booth, although we had more than a few disappointed faces due to running out of IntelliJ swag on the previous day!

I gave my talk on how to build high-quality datasets for machine learning in the afternoon. I was up against some tough competition in my time slot, so I was pleased with the attendance. My speaker gift was a donation to Code Chautari, an NDC-founded group in Nepal that teaches computer literacy and programming to schoolchildren.

Cool to learn how to improve (to at least “usable” state) data used in your ML models from @t_redactyl at #NDCOslo. pic.twitter.com/rhikPxiz8B

The official party was that evening. The highlight was a game show called “Who Wants To Be a Javascriptær”, where contestants had to answer increasingly bizarre questions about Javascript to win prizes. It seems that I was not the only one dumbfounded at how crazy JavaScript is, as no one was able to make it to the final rounds to win the big prizes before it was time for the band to play.

I never realised how insane JavaScript was until last night's game at #ndcoslo 😭🙈 pic.twitter.com/m1FlIad1fI

The final day was a lot quieter, with a lot of people heading off in the morning or early afternoon. I recorded a technical video and some footage for a short for the NDC channel in the morning.

Over lunch, we finished off the JavaScript game show using Slido. Maarten Balliauw came 10th (luckily not winning the 1-year All Products Pack subscription we donated!) and got a nice stack of books as his prize.

By around 3:00 pm, most people were gone. We stayed and watched the hilarious locknote by Mark Rendle, then packed up. NDC Oslo – done!

As I’d never been to Norway, I booked a couple of extra days in Oslo. Unfortunately, I was already coming down with a cold, but I still managed to do a little sightseeing and sample some incredible cocktails on Saturday.

Absolutely insane cocktail based on the Oslo Opera House. This bar is so cool! pic.twitter.com/0EKwnKBQdk

On Sunday, I went out to the Norwegian Museum of Cultural History, where they’ve transplanted traditional houses from all over the country. The highlight was naturally their stave church, which was relocated from a region north of Oslo in the 19th century.

My first NDC Oslo was a really great experience and lived up to the hype my friends had built up over the years. The organizers are really amazing people and went out of their way to make me feel welcome, especially as a first-time attendee. I also felt very pampered as a speaker, from the conference covering all travel, to the lovely hotel, to the generous speaker gift. I would really love to attend other NDCs. Who knows, maybe I’ll even have a chance to get back to home soil at NDC Sydney or Melbourne!